So, needless to say I completely fell off the blogging bandwagon.

My last post (which you can find here) was about my 3 year old getting ready to start nursery and as we’re coming up to the end of her first half term, I thought it’d be a good time to post a little update.

I was a nervous wreck on her first day. I was all big, manic smiles and ‘oh WOW you’re going to have so much fun!!!’ on the outside but I felt like I was constantly holding back a big cry. She actually wasn’t too sad when I left but I don’t think she really knew what was going on. I tried to ask her teacher if they would call me if she needed me and I just started crying and had to leave. Thankfully a few other mums were really kind and told me they had been the same, which helped as I felt like I’d made a bit of a scene! 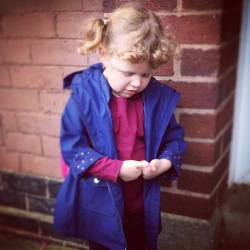 I spent those first 3 hours clock watching and desperately trying to fill the time until I could go and get her. When I got there the teachers said that she’d had a few teary moments but they managed to keep distracting her. She obviously knew what to expect after this as every time I took her in since she was really upset when we said goodbye. Every giant sob and ‘I want my mummy!’ felt like a stab to the heart. I cried walking home every day for the first week or so.

Despite this though, she never said that she didn’t like it or didn’t want to go and was always excited in the morning beforehand so I knew that she liked nursery and everyone there but it was just the leaving me that was upsetting her.

However, I am SO PLEASED to finally be able to say that as of last week she has stopped being upset at drop off and is really happy whilst she’s there! She seems to have grown up so much in such a short space of time. She loves ‘playing school’ and names her toys after children in her class which is so lovely to watch.

It’s taken us a few weeks to get into our new routine. Obviously beforehand we could just roll through each day and do whatever we wanted but I’m really enjoying having more structure to our day. Also, the 10 minute walk 4 times a day is helping to shift those final few baby pounds!

I actually enjoy the hours where she’s at nursery now as I know she’s happy and having much more fun than if she was at home. It also means that Baby Knight and I get to have some time on our own and he is such a good lunch date. 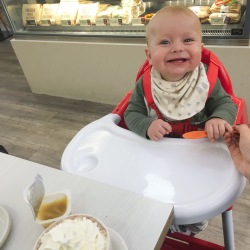 I never tell her I’ve missed her as I don’t want her to feel sad about it but it is odd sometimes when I want to tell her something and she’s not there. Is it weird that I miss her when certain songs come on the radio? Little Knight loves a good kitchen disco.

My favourite part of the day is picking her up and hearing about her afternoon. I’m so proud of how well she has settled in. She is definitely ready for a week off now though, poor child is exhausted!